MY CAT KURT NEEDS CHEMO - I NEED FUNDING FOR IT

Hey, y'all!  I know it's been ages since I've posted, but things have been hectic around Grandma's house in the past months. And the past weeks  have been even worse. 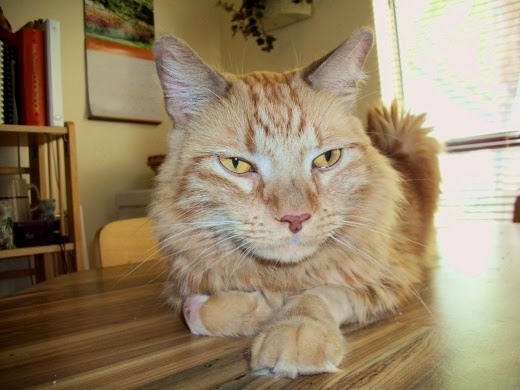 Three weeks ago today I noticed that my cat, Kurt, was having trouble breathing so I took him to the Emergency Vet Clinic. Thinking that he may have pneumonia, the vet there took an xray and gave him some meds. The next day I took him to my regular vet and he didn't see anything remarkable and said that if  the breathing problem continued, Kurt needed to see a specialist.

By the end of the week, it was obvious that Kurt's breathing was getting worse. I was like he was having to really work to get a breath. Friday of that week we went to the Gulf Coast Vet Specialists to see Dr. Menino. They did a CT scan and discovered that Kurt had a diaphragmatic hernia - basically a hole in his diaphragm that allowed his liver and gall bladder to move up close to his heart. And with a hole in one's diaphragm, it's hard to breathe. So surgery was scheduled to get that fixed. 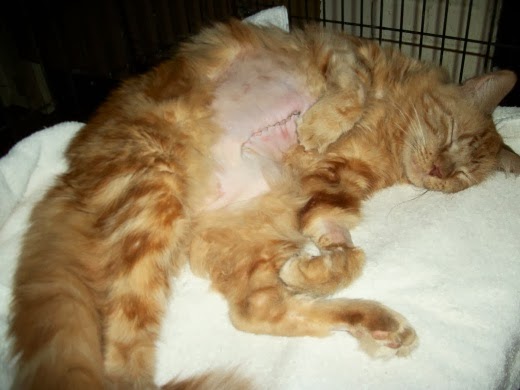 Kurt showing off his incision after surgery

After the surgery, Kurt was breathing much better for a few days. Then he started regressing and struggling to breathe. So they did another xray from a different position and found that Kurt has a mass that is blocking 50% - 70% of his trachea. So a biopsy was done and Kurt was started on prednisone in an attempt to bring down any inflammation.

The biopsy was not totally definintive, but points to lymphoma. After spending several hours over several days at the urgent care clinic at Gulf Coast, Kurt is scheduled to start his radiation therapy on Monday, March 10. He will also most likely undergo a round of chemotherapy, but the radiation will get a quicker result so it's starting first.

Because I've spent a fortune already on his surgery and scans, I'm trying to raise some money to pay for his chemo/radiation by starting a campaign on Indiegogo.com. You can find the campaign here http://www.indiegogo.com/projects/help-kurt-continue-breathing/x/6569290 Donations can be made by credit card or PayPal. I've never been one to ask for help on anything, but, to help Kurt and to be able to keep feeding my other cats, I've had to do this. 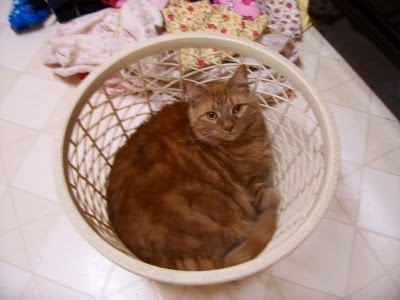 Kurt is just 8 years old and was part of a family rescued by my neighbor when Kurt was a kitten. I took them in, hoping to find Kurt, his brother, sister and mother a good home. Well, they ended up making there home with me. Kurt is a big boy, weighing about 23 pounds at his heaviest, though he weighs about 15 pounds now. If he can get this therapy, maybe we can give Kurt another good year or maybe more.  If you can't or just don't care to donate, please pass this on to anyone you know who might be able to help us out. Thanks in advance for your kindness.


Posted by Grandma Barbara at 6:25 PM

Thanks for stopping by!

Grandma Barbara
Houston, TX, United States
I'm grandma to two wonderful grandkids (hence the name Grandma Barbara) and mom to a great son. I'm retired from over 30 years with the federal government. I discovered rag quilting a while back and found I could sell my creations. I've also learned to make lovely tote bags and strip-pieced quilts. Now I list my creations on Etsy.com - a great place to find all sorts of handmade items. My latest endeavor is making rag quilts from baby clothes. This makes a great heirloom to pass down thru the family. Please feel free to contact me at grandmama.barbara@yahoo.com